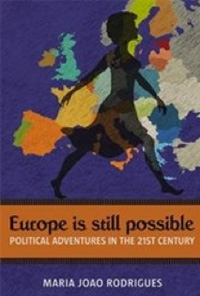 The author, Maria João Rodrigues, a European woman born in Lisbon and living across Europe for fifteen years, has been involved in different fronts of European politics, with several hats as minister, member of EU presidencies leading bodies, special adviser in the EU institutions, counsellor to other governments and international organisations, as well as being a renowned expert, conference maker, and professor of European economic policies.

Among many of her publications are: Europe, Globalization and the Lisbon Agenda (2009), European Policies for a Knowledge Economy (2003), The New Knowledge Economy in Europe: A Strategy for International Competitiveness and Social Cohesion (2002).

This is a thriller and an essay about Europe and the world in the twenty-first century, with a European woman called Maria as the central character dealing with many renowned personalities. Several inside stories of recent European history are revealed, from the invention of a European strategy for a new kind of growth to the troubled negotiation of the current EU treaties, the establishment of new relationships with the emerging powers of China or Brazil, the reform of global governance in the face of climate change and the financial crisis, and finally, the painful Eurozone crisis, leading to a major transformation of the European Union as a unique economic and political entity. The final outcome is an exciting and amusing patchwork of stories, where behind-the-scenes politics are interwoven with the collective invention of new political ideas and some touching personal events, taking place all over the world, from Brussels, Berlin, Paris, London, Rome, and Warsaw to Washington, Brasilia, Johannesburg, and Beijing. This essay was written as an e-book, easily digested in short paragraphs on Kindles, tablets, and laptops, wherever you are. After this reading, the current Europe and European Union will become something easier to love or to hate and hopefully something easier to understand and to change.

Extracts
« Maria, like all the Portuguese presidency team, was exhausted after six months, not just launching a landmark agenda but also running the rest of the EU’s policy business. Her remedy was a travel to Africa to get well away from Europe, at least for a while. First, in the Kruger National Park, she was up even earlier than for the average presidency meeting: five in the morning to try to identify the big five – animals, that is, not EU member states. But by the time her trip ended in Mozambique, Maria had received news of her grandmother’s death. She was also waited in New York for a meeting of progressive governance leaders, as she had been in charge of coordinating a report that was on the table and up for discussion.” p.45

« Political Adventures in 21st Century Europe will provoke the readers’ thoughts and let them come to love or hate Europe and European Union. Hopefully, it will also lead them to understand the system better. » broadwayworld.com

« Maria João Rodrigues, GG10 member and Professor at the Université libre de Bruxelles and the University of Lisbon, has just published a new book titled Europe is Still Possible. The book mixes discussion of behind-the-scenes European politics with economic analysis to address the important question of how can countries converge in spite of their differences. Ms. Rodrigues addresses the economic and employment challenges in Europe today, including by bringing in comparative analysis of China and Brazil. She discusses how work towards a European strategy for a new kind of growth is needed, as well as a search for a new global deal. »