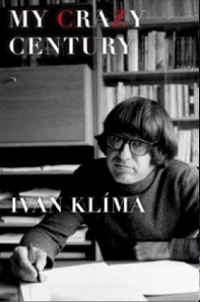 Ivan Klíma was born in Prague in 1931. He is the award-winning author of over twenty novels, including Waiting for the Dark, Waiting for the Light, No Saints or Angels; The Ultimate Intimacy; and Lovers for a Day – all New York Times Notable Books of the Year.

More than a memoir, My Crazy Century explores the ways in which the epoch and its dominating totalitarian ideologies impacted the lives, character, and morality of Klíma’s generation.

Klíma’s story begins in the 1930s, in the Terezin concentration camp outside of Prague, where he was forced to spend almost four years of his childhood. He reveals how the postwar atmosphere supported and encouraged the spread of Communist principles over the next few decades and how an informal movement to change the system developed inside the Party.

These political events form the backdrop to Klíma’s personal experiences, with the arrest and trial of his father; the early revolt of young writers against socialist realism; his first literary successes; and his travels to the free part of Europe, which strengthened his awareness of living as part of a colossal lie.

Klíma also captures the brief period of liberation during 1968’s Prague Spring, in which he played an active role; the Soviet invasion that crushed its political reforms; the rise of the dissident movement; and the collapse of the Communist regime in the middle of the Velvet

Revolution of 1989. Including insightful essays on topics related to social history, political thinking, love, and freedom, My Crazy Century provides a profoundly rich and moving personal history of national evolution. Ivan Klíma’s first autobiography and perhaps his most significant work, it encapsulates a remarkable life largely lived under occupation.

“ A young Czech editor from BBC Radio, for whom I sometimes wrote commentary, once asked me, “Why don’t you write about why you were a Communist in your youth? I think listeners would be very interested.” I realized that although I had used many of my experiences as material for my prose, I had avoided my several-year membership in the Communist Party, perhaps with the exception of a few mildly auto-biographical passages in the novel Judge on Trial.

For quite a long time now I have considered the Communist Party or, more precisely, the Communist movement, a criminal conspiracy against democracy. And it is not pleasant to remember that, even though it was for only a short period, I had been a member of this party.

But was my young colleague from the BBC correct? Who today could be interested in the reasons why so many people from my generation succumbed to an ideology that had its roots deep in the thinking, in the social situation and societal atmosphere, of the turn of the nineteenth and twentieth centuries?

Marxism, which invoked a Communist ideology, is today somewhat forgotten. Its revolutionary theories have been refuted by practice. These days people are threatened much more by international terrorism; instead of battling Marxism, democracy is battling radical branches of Islam.

But it is less ideology than the need of people, especially the young, to rebel against a societal order that they did not create themselves and do not consider their own. Besides, people need to have some kind of faith or goal they consider higher than themselves, and they are inclined to see the world and its contradictions in unexpected, apparently simple relationships, which appear to explain everything that is important, everything they are going through, or everything with which they do not agree. And for these often deceptive goals they are willing to sacrifice even their lives.

All ideologies of the past that led to murder could evolve only when they had purged from the minds of the people everything they considered inappropriate and compelled the people to fanatical loyalty to their ideas, which they proclaimed appropriate; In this they did not differ from contemporary ideologies that lead to murder to terrorist murder.

Perhaps this attempt of mine to recount and analyze what took place in my life might have meaning even for those who consider communism as a long-dead idea. In my account, I mainly concentrate on the circumstances that, in this crazy century, often led mankind astray, sometimes with fatal consequences.”p.1-2

‘His [Klima’s] impassioned memoir is emblematic of Czechoslovakia’s struggle – and perhaps the struggle of much of central Europe – during the dark years between the Second World War and the ‘Velvet Revolution’ of 1989.’ – Daily Telegraph

‘As a writer, Klima is more reporter than fantasist. He observes and broods and then he writes it down… Klima has never been one for account-settling and acerbity and My Crazy Century is as interesting for its ruminative account of his emotional and personal turmoils as it is for its chronicling of postwar Czech history.’ – The Guardian

‘More than a memoir of an extraordinary life, it is an account of an age – and of the destructiveness of successive and symbiotic forms of totalitarianism, and of a critical intelligence that survived them.’ – Jewish Chronicle