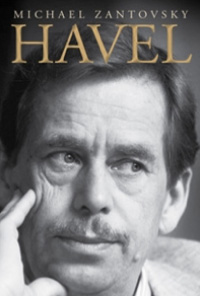 Michael Žantovský is the current Czech Ambassador to the Court of St James. He was among the founding members of the movement that coordinated the overthrow of the communist regime. In January 1990 he became the spokesman, press secretary and advisor to his lifelong friend, President Václav Havel. He has combined a career in politics and the foreign service with work writers.

Václav Havel: iconoclast and philosopher-king, an internationally successful playwright who became a political dissident and then, reluctantly, a president. His pivotal role in the Velvet Revolution, the end of Communism and the birth of a modern, west-facing Czech Republic makes him a key figure of the twentieth century. He was a character of great contradictions, a courageous visionary who put his life at risk, a leader who inspired great loyalty; yet a man wracked with doubt, self-criticism, depression and despair. Above all he was an intellectual and artist, always true to himself, someone who never lost a profound sense of the absurd.

Michael Žantovský was one of Havel’s closest friends. They met as dissidents under Communism, and when a frail Havel was released from prison in May 1989 just months before the Velvet Revolution it was Žantovský who carried his bag for him; during Havel’s first presidency Žantovský was his press secretary, speech writer and translator, and their friendship endured until Havel’s death in 2011. He is therefore uniquely placed as Havel’s biographer; a rare witness to this most extraordinary life.