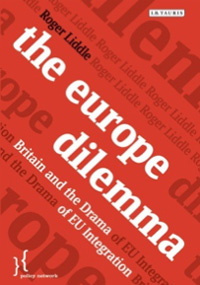 Lord (Roger) Liddle is Chairman of Policy Network and became a Life Peer in 2010. He was formerly Tony Blair’s Special Advisor on European Policy and subsequently worked for three years in the European Commission, first in the Trade Commissioner’s cabinet and then advising the President of the Commission. He has been at the heart of the European debate for two decades, with detailed knowledge of both the politics and public policy.

Presentation
What is Britain’s future in Europe? This book revisits an old argument but for dramatically new times. The old argument is about Britain’s ‘semi-detachedness’ from Europe and whether that posture could ever change. The new times are the crisis in the Eurozone and its wider impact on the European Union’s future. While logic may point to deeper integration, the politics associated with the EU’s problems make this a significant and possibly insurmountable challenge. Where should Britain stand? What future should Britain want for the EU? And how important is continued membership of the EU for Britain’s future? This book offers new answers to these questions from the perspective of an author who has combined experience both at the heart of the British Government, as Tony Blair’s European adviser and with years of understanding Europe from the inside – working at a senior level in the European Commission. This book will be essential reading for anyone interested in the future of British and European politics.

Extracts
«Pro-europeanism was vital to where Blair, now ensconced as leader, aimed to take the Labour Party and Britain. He wanted to create a broad-based governing Labour majority. He wanted to change British political history, reversing the dominance of the Conservatives. He sought a long-term transformation in Britain, brought about by a durable period of “progressive” government, implementing gradual social improvement, and sustained by a “big tent” progressive majority. Europe was an essential prop of that big tent. » p.42

Reviews
‘Roger Liddle’s excellent account of Britain’s long wrestling match with Brussels…is a powerful reminder that Europe does not divide only the Conservatives… His book is required reading for anyone who wants to look beyond the sloganising in which the debate is most often framed.’
Philip Stephens, Financial Times

‘Riveting and realistic, this book offers by far the best-informed analysis I have read of the European dilemmas facing modern British Governments, as well as the most cogent argument for European solutions to our national challenges.’
Sir Stephen Wall, formerly Britain’s Permanent Representative to the European Union

‘Roger Liddle’s analysis of ‘how we got here’ is interesting and as expected well-informed but it’s his reflections on the approach pro-Europeans should take which could add a new dimension to the debate. Pro-Europeans have sometimes seemed to be in a competitive bidding process with eurosceptics as to what powers we can repatriate, and far can we chip away at the role of the EU. This is dead-end reasoning. Liddle makes a compelling case for an alternative and bolder British EU agenda.’
Julian Priestley, Secretary-General of the European Parliament 1997-2007

‘Roger Liddle offers a fresh and shrewd account of the many missed opportunities in Britain’s relations with the EU- including a frank assessment of the disappointments of Tony Blair, whom he served as an adviser in Downing Street. He concludes with an alternative view of how the UK could still play a positive and constructive role in Europe.’

Peter Riddell, Director of the Institute for Government

‘This is a hard-hitting account of the frustrating politics of British European policy across the decades from an insider who persists in holding to a positive case for full-hearted British engagement in Europe. Roger Liddle provides a fine-grained analysis of the squandered opportunities as well as the achievements of New Labour’s period in office and offers salutary comments on the dilemmas facing the Conservative Party and future governments.  He is surely right in arguing that for the British to be at ease with Europe requires conviction in their souls and not only appeals to their pocket books.’
Dame Helen Wallace, Emeritus Professor in the European Institute, LSE