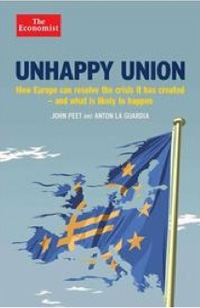 Biographies of the authors

John Peet is Europe editor and a former Brussels correspondent of The Economist.

Anton La Guardia is Brussels correspondent of The Economist, for which he writes the Charlemagne column. He previously worked for two decades as a foreign correspondent in the Middle East and Africa, and is the author of Holy Land, Unholy War: Israelis and Palestinians (Penguin, 2006).

The euro was supposed to create an unbreakable bond between the nations and people of Europe. But when the debt crisis struck, the flaws of the half-built currency have brought the EU close to breaking point after decades of post-war integration.

Europe’s leaders have so far proved the doomsayers wrong and prevented the currency from breaking up. « If the euro fails, Europe fails, » says Angela Merkel. Yet the euro, and the European project as a whole, is far from safe. If it is to survive and thrive, leaders will finally have to confront difficult decisions. How much national sovereignty are they willing to give up to create a more lasting and credible currency? How much of the debt burden and banking risk will they share? Is Britain prepared to walk away from the EU? And will other countries follow? In their astute analysis of the crisis, the authors describe America’s behind-the-scenes lobbying to salvage the euro, economists’ bitter debates over austerity, the unseen manoeuvres of the European Central Bank and the tortuous negotiations over banking union. In the final chapter, they set out the stark choices confronting Europe’s leaders and citizens.

« After months of indecision and half measures, the euro was now in mortal danger. The mood of foreboding grew darker still on May 6th 2010, the day of a strange “flash-crash” on Wall Street, in which the Dow Jones Industrial Average collapsed by about 1,000 points before recovering within minutes, perhaps because of a technical glitch. The ECB’s governing council, in Lisbon that day for its monthly meeting, faced a momentous decision: should it start buying sovereign bonds to stop the panic? The Federal Reserve and the Bank of England had been doing so under their policy of quantitative easing to bring down long-term borrowing costs. But the ECB had not gone so far, wary of the prohibition against anything resembling “monetary financing”, that is, printing money to finance public debt. After the official meeting, Trichet told journalists that the subject of bond-buying had not been discussed. Later on over an informal dinner, however, the council had reached a tentative agreement to start selectively buying the bonds of vulnerable countries. The next day, as leaders gathered in Brussels for a euro-zone-only summit, ostensibly to endorse the bail-out of Greece; many participants seemed unaware that they would be called upon to do something much bigger:  set up a safety net for the whole euro zone.” p.47

“The euro crisis has, in short, managed to distract attention from much of the rest of the agenda of the Commission, national governments and the European parliament since 2009. Economic difficulties have inevitably sapped the European Union of much of its broader influence in the world. And because Europe’s political leaders have spent so much time trying to repair the defects in their single currency, they have devoted much less attention to considering the future shape and direction of the EU. As the immediate worry that the euro might collapse dissipates and with the prospect of a new Commission and new European project that is itself in some danger of falling apart due to political neglect.” p.140