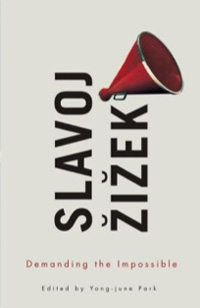 Biography of the author
Slavoj Žižek is a Slovene sociologist, philosopher, and cultural critic.
He was born in Ljubljana, Slovenia (then part of SFR Yugoslavia). He received a Doctor of Arts in Philosophy from the University of Ljubljana and studied psychoanalysis at the University of Paris VIII with Jacques-Alain Miller and François Regnault. In 1990 he was a candidate with the party Liberal Democracy of Slovenia for Presidency of the Republic of Slovenia (an auxiliary institution, abolished in 1992). Since 2005, Žižek has been a member of the Slovenian Academy of Sciences and Arts.

Žižek is well known for his use of the works of 20th century French psychoanalyst Jacques Lacan in a new reading of popular culture. He writes on many topics including the Iraq War, fundamentalism, capitalism, tolerance, political correctness, globalization, subjectivity, human rights, Lenin, myth, cyberspace, postmodernism, multiculturalism, post-marxism, David Lynch, and Alfred Hitchcock.
In an interview with the Spanish newspaper El País he jokingly described himself as an « orthodox Lacanian Stalinist ». In an interview with Amy Goodman on Democracy Now! he described himself as a « Marxist » and a « Communist.

Where are we today and what is to be done? Slavoj Zizek ponders these questions in this unique and timely book. Based on live interviews, the book captures Zizek at his irrepressible best, elucidating such topics as the uprisings of the Arab Spring, the global financial crisis, populism in Latin America, the rise of China and even the riddle of North Korea. Zizek dazzles readers with his analyses of Hollywood films, Venezuelan police reports, Swedish crime fiction and much else. Wherever the conversation turns, his energetic mind illuminates unexpected horizons. While analyzing our present predicaments, Zizek also explores possibilities for change. What sort of society is worth striving for? Why is it difficult to imagine alternative social and political arrangements? What are the bases for hope? A key obligation in our troubled times, argues Zizek, is to dare to ask fundamental questions: we must reflect and theorize anew, and always be prepared to rethink and redefine the limits of the possible. These original and compelling conversations, many appearing here for the first time in English, offer an engaging and accessible introduction to one of the most important thinkers of our time.

Extracts
« I see explosions everywhere. In Qatar, a female curator at a museum took me to an industrial city in the suburb of Doha. I asked immediately who does the work for all those nice buildings. It seemed almost like a concentration camp. You have military barracks for immigrant workers. They just seem like self-employed men who sold themselves into slavery. Many of them came from Nepal, Indonesia or Philippines. And four years, they take away the workers’ passeports and claim that it is a safe way to pay this stipend. They are not even free to leave. They have to work without air conditioning where the temperature in summer rises 57° C. Literally, in this temperature, if you step out you can fry eggs without any problem. And they are paid $150 per month out of which the company takes some for food.” p.23

“You probably didn’t experience the war, but I did. I can tell you that it’s not nice at all to live in that kind of situation. It’s nice to go on a demonstration and then go and sit in a cafeteria and discuss the demonstration and so on. To see the public disintegrate is not a nice thing. This is why I think that, if you want revolution, you should be a part of law and order. There’s nothing dishonorable about people wanting basic security. My god, I like to feel safe. Horrible things happen if you don’t have the basic law and order.” p.75