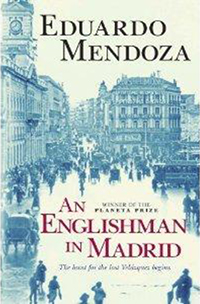 “Handing Anthony the key to his room, the hotel receptionist told him that a gentleman had been asking after him that afternoon.

“Absolutely. I attended him myself he gave your full name. He didn’t leave any message or say if he would be back. From his appearance he was probably a foreigner, although he spoke Spanish as well as you, but with a better accent, if you’ll permit me to say”.