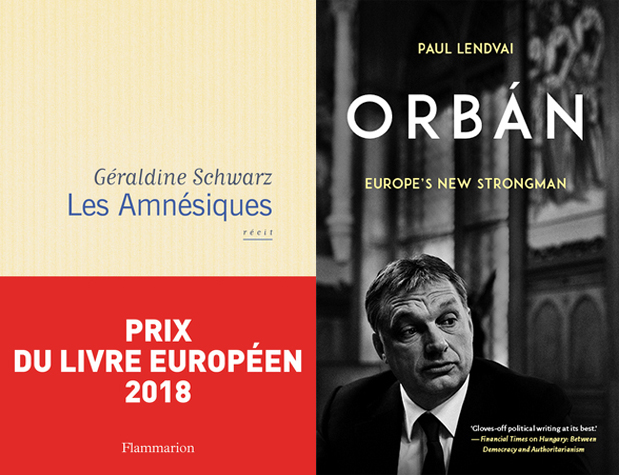 The 12th European Book Prize awarded each year at a prestigious ceremony in the European Parliament has been by Paul Lendvai for the Hungarian Prime Minister, Viktor Orban and by Geraldine Schwarz for her highly personal exploration of how the German family she married in to was involved in stealing from Jews in the 1930s and then living her their crime as Amnesiacs in post-war years.

The prize is awarded by a jury to senior editors and correspondents working on European journalism in Brussels and is presided over each year by a prominent artist – in 2018 Krzysztof Warlikowski, the Polish stage director.

The jury also decided to award a special prize to Philippe Sands for his book East West Street published in 2018 in France as Retour à Lemberg.

Denis MacShane, former UK Europe Minister and a member of the organizing committee said : « These are three major books on Europe as it is today and as it has been shaped by its recent past. Every country in Europe is now publishing more books than ever in all the languages of Europe about all the countries of Europe. It is my summer pleasure to read all these book and under Pascal Lamy’s guidance and with colleagues on the organizing committee draw up a long list. I am glad I don’t have to make the final decision. But all three books are superb and deserve translation into other European languages if this had not already been done. »

The European Book Prize was set up in 2007 by Jacques Delors by the Paris based organisation Spirit of Europe run by France Roque. The Prize seeks to promote the best of European writing by awarding a prize for fiction or narrative and non-fiction each year to a book that explores the meaning of the European Union.

Scroll back to top